If you were to walk through the city of Boston, you would be bombarded with Irish culture. On your left would be Irish-themed restaurants and pubs, and a head turn in the opposite direction would bring a monument commemorating the Irish potato famine into view.

On my own walks through the city, especially those with my grandfather, I was struck by the prevalence of Irish culture, and it resonated with me. These experiences would eventually lead me to dedicate my junior year to researching the Irish impact in Boston for my RHI project. The challenge was to take my interest in Boston’s Irish culture and fit it into this year’s RHI theme: Debate and Diplomacy, Successes, Failures, and Consequences. My initial research indicated that the Irish experience in Boston could naturally fit this theme. Upon the arrival of the Irish, there were many conflicts, debates, and riots, and I could only assume that some form of diplomacy occurred because, as we know, the Irish successfully assimilated into Boston. After discovering this, my RHI project was born, and my thesis soon followed: The Irish immigrants’ strong sense of cultural identity and support for one another altered the culture in the city of Boston and changed what it meant to be a Bostonian.

It’s no secret that Ireland was a challenging place to live in the 1800s. Because a majority of the country was impoverished and jobless, the first wave of immigrants came to America in the 1820s and 1830s. This was soon followed in the 1840s by a second wave as a result of the Irish potato famine.

The instant the Irish arrived, they were faced with conflict and discrimination and quickly realized that the immigration process was not so simple. In my research, I found that there were a number of factors contributing to the Americans’ distaste of Irish immigrants. First, the Irish religion: Boston had spent years establishing its Anglo-Saxton-Protestant character, but the Irish were staunchly Catholic. In Bostonians’ minds, Catholics entering the city threatened to uproot this religious identity. Another challenge was the Irish’s effect on Boston’s workforce: once the Irish started willingly filling positions that Bostonians refused to take because of the low pay and poor working conditions, the tension between the two groups quickly escalated. Often when workers went on strike or fought their employers about wages or hours, the managers would fire the American workers and hire the Irish because they were willing to work for half the price and longer hours. The progress made in terms of fair wages seemed to be undone with the Irish immigrants’ arrival.

Now, you might be wondering: how intense were these conflicts? They went far beyond the tossing of insults or explicit word exchanges between the Irish and the Bostonians; there were actually frequent violent encounters between the two groups. The infamous 1837 Broad Street Riot, for example, involved nearly 1,000 Irish Catholics and Yankee firefighters. Upset with the Irish, who they believed were undoing all of their progress for wages and working conditions, the Yankee firefighters initiated an all-out brawl; yet, primarily the Irish were the ones arrested and jailed. Another significant event was the burning of the Ursuline convent in 1834. A Protestant mob stormed the Ursuline convent in Charlestown and burned it with Roman Catholic nuns inside, many of whom were Irish. 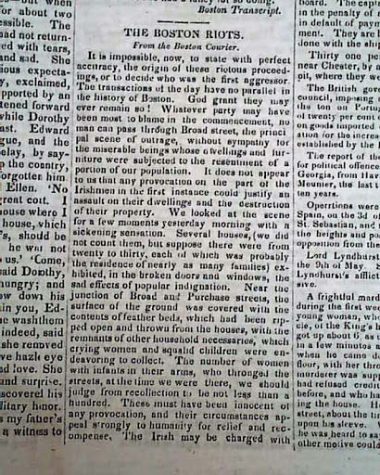 All of this and more occurred during just the first wave of Irish immigration; relations only worsened with the second wave. The violence did not cease, nor did it stay restricted to everyday citizens. Rather, the conflict was now being brought to the political sphere at a more national level, resulting in an external third party established in the 1850s called the Know-Nothings. This party was an American political party based on strong anti-immigrant and anti-Catholic sentiment that reached beyond the city of Boston. The influx of different groups of immigrants (primarily Irish in the East) posed an economic and security threat to the Protestant Americans. The Know-Nothings took a very aggressive path towards “purifying” major cities of Catholics by burning and destroying their property, spreading propaganda, and harming the people. This political group had the most significant impact on Irish assimilation, for they made it nearly impossible for the Irish to settle down and make peace.

At this point I found myself wondering how the Irish ever managed to assimilate into a city that hated them so much. I knew there was no specific treaty signed or law passed that signified the successful assimilation of the Irish, so I had to dig a little deeper. Eventually, I found that many Irish people became homeowners and elected officials; in fact, over the next couple of decades, the number of Irish names that appeared on the log of elected city councilman increased exponentially with each election cycle; therefore, I concluded that it was their perseverance, togetherness, work ethic, resilience, and a strong sense of identity that forced the Bostonians to accept the Irish and adopt their culture over time.

After making this discovery, I could not help but feel a sense of pride. I was proud to be associated with these people, and I was proud that now I finally understood all that my grandfather talked about. I also felt I had a newfound understanding of the city that I know and love. I have so much more appreciation for the fact that our basketball team is the Celtics, the city hosts a major annual St. Patrick’s Day parade, and many Irish monuments are scattered throughout the city. The effect the Irish had on Boston is undeniable. 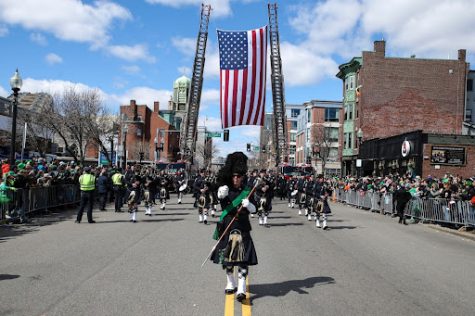 For many people, assimilation and change are scary, and they are sometimes reluctant to welcome new groups into their cities. But the Irish have demonstrated that assimilation can be positive and that it is an integral part of diversifying our cultures. Additionally, from the Irish, we learn that it is vital to empathize with immigrants trying to adapt to a new home. While change may be intimidating, it is essential for successful growth and development. My grandfather came to Boston and began a new life here more than 60 years ago, and I know at just 18, it was not an easy road. He left his parents and seven siblings in search of better job opportunities. However, the network of Irish support in the city made his adaptation easier. I find myself inspired by this story; the Irish exemplify genuine resilience and perseverance. They truly never stopped fighting for their place in Boston, and their hard work was so successful that they influenced an entire city and its people. I can’t help but be fully in awe and proud of their strength and willpower.

The Hub: Boston Past and Present

“Irish-American Identity, Memory, and Americanism During the Eras of the Civil

“Significance of Immigration in the Formation of an American Identity.”