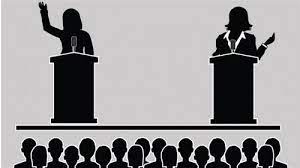 March 23rd, 2019. I stand at the front of the classroom, the only sound among these four walls being the steady rhythm of the second hand. I peer around at my competitors, as if daring them to interrupt the moment of silence I have created. Their eyes stay on me, and no one moves.

Another second passes, and I launch back into my speech piece. It would be a strange sight to anyone unfamiliar with speech and debate: a clumsy girl in a navy blue suit holding a binder, performing a mix of poetry, prose, and news articles to five other students and a judge. But, to me, it was just another Saturday performance at a speech tournament. And in that moment, I realized that that small, deliberate pause of quiet was what kept my audience’s attention; it’s what made my speech my own.

My use of silence hasn’t always been so calculated. Since I was a child, I have been labeled as the “shy, quiet girl”, and I accepted that judgment, because it didn’t strike me as insulting. I have always been one to observe and think deeply well before I speak, and I’ve recognized the value of silence for much longer than I’ve been able to articulate it. But as I grew up, I noticed the mocking and pitying tone that peers and adults used when they described me as “quiet”. If everyone found fault within my silence, perhaps it was a fundamental issue within myself that needed to be remedied.

My quiet has been mistaken by others for coldness, bitterness, and intimidation. For years, I felt uncomfortable in my own skin, trying to change my natural patterns of speech to create a more palatable version of myself for others. I spoke out of turn, tried to dominate conversations, and told so many unforgivably forced jokes.

In the process of feigning extraversion to everyone else, I had lost sight of my own integrity. I longed for the way I used to move through the world, observant and knowledgeable, and I wanted to feel comfortable in my old self again.

I reminded myself every day that “quiet” was not synonymous with “weak”. I no longer fought against myself when I held my tongue. I practiced listening to others with the same careful attention that I wanted to be listened to with. I learned that extraversion was not a requirement for being liked, and that more importantly, the only opinion of myself that mattered was my own.

Often, silence says more than any amount of words can. Nowhere was this more apparent than at speech tournaments, where most competitors rushed through their piece in order to fit the most words into our allotted ten minutes. Instead, I aimed to weave silence into my piece as if it was a guest star. I paused after each poetic twist of words, and my silence reverberated throughout each room. Yet, what I couldn’t have realized at the time was that my silence wasn’t just a party trick I could reveal at speech tournaments; it’s what allowed me to heal.

August 28th, 2021. I stand at the foot of my grandpa’s grave, my life filling with silence. Moments of silence to honor him. Silence between me and my family members when none of us knew what to say. The silence made them uncomfortable, because our empty speech mirrored the empty place in our family. But, to me, the quiet was familiar.

Silence was my comforting companion through the grief, because I never had to explain myself to it. Silence never asked me to put words to tragedy. Silence didn’t expect me to perform emotions of sadness, or guilt, or anger. My silence always understood the things I couldn’t say. My silence looked at me without judgment, wrapped me in an embrace, and made sure I knew it would be okay.