Honorifics: Who Are We Honoring? – A Gender Perceptions Essay 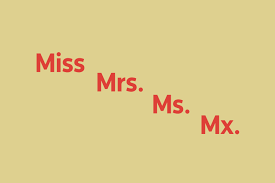 Society has a tendency to scrutinize women’s personal choices instead of men’s. Namely, women are expected to clarify whether or not they are married on a daily basis. Not only are men not expected to share their marital status, they do not have the option to do so. This can be seen in the honorifics and/or sets of honorifics people use. For example, there is one honorific that men can go by, which is Mister. Women on the other hand, can be called Mrs., Ms., or Miss. I will be focusing on the different purposes of Mrs. and Ms. as well as the discrepancies between the honorific(s) for men and women. I sent out a survey to the faculty and staff of Bancroft School asking their opinions on honorifics and the possibility of a gender-neutral honorific. Many respondents of the survey expressed that the use of Mrs. in general is outdated and there is no need to broadcast one’s marital status. In addition to the use of Mrs., the fact that women are expected to take their husband’s name once they’re married is frustrating. It is worth noting that a large sum of children have their father’s last name. A 2017 study found that heterosexual parents passed down the father’s last name 96 percent of the time (Waters). Regardless of whether a mother keeps her maiden name, it is most common for children to inherit their father’s last name (Waters). In the somewhat rare case that a woman keeps her own surname when she’s married, chances are that it’s her dad’s name. These practices reinforce patriarchal ideals. The names of married women and children are reduced to those of a man: in this case a husband or father. People, particularly women, are diminished to their relation to a man.

As I grew up, I never questioned the culture surrounding honorifics. Originally I didn’t see anything wrong with the expectation for a woman to constantly reveal her marital status. Once I got older I began to notice the differences in how women and men are treated. I came to the realization that there isn’t a need to use honorifics the way we do now. It is unnecessary to put marriage on such a high pedestal. Meaning that in some settings, such as schools, there is no reason for a student to know whether or not their teacher is married. In the aforementioned survey, many expressed their disapproval of the use of honorifics in schools. Some suggested that teachers simply going by first names would suffice. Although, there are instances where it is necessary to refer to someone by using an honorific.

In my opinion, I believe that we don’t necessarily need separate honorifics for men and women, but there should be a way to distinguish people in positions of power from ordinary citizens. This doesn’t mean there has to be a difference between students and teachers; I believe that going by first names would work for both parties. Honorifics are necessary in formal settings. For example, it wouldn’t make sense to call the president by their first name if you don’t personally know them. If you are speaking directly to the president, you would say “President Last Name.” This type of honorific works because there is no gender attached to it. Just because there have only been male presidents in the United States does not mean that president is a gendered term. We can train ourselves to remove gender from honorifics such as president, which can then lead to a more inclusive society (provided that society is already accustomed to gender-neutral titles such as doctor, professor and coach). The only purpose of titles like these is to provide a separation between people and their superiors. This kind of practice could, in my opinion, easily be adopted in schools. Gender is irrelevant in formal settings where honorifics are needed. If first names are too casual to refer to teachers; then my suggestion would be to try to normalize, to the best of our abilities, the word teacher as an honorific. Some even suggested this in the survey. It is already commonplace for college students to call their professors “Professor Last Name.” There’s no reason why the same thing can’t happen for teachers. We just aren’t used to it yet.

Before writing this essay, I had many questions that the survey helped me answer, but the survey also raised new questions. The survey raised points such as the use of honorifics in other cultures, whether it is a privilege that men cannot display their marital status in the form of an honorific, and how we can incorporate personal preference to decide which honorific works best for an individual. While I recognize that I cannot answer all these questions, it is important that we keep an open mind as we continue to have conversations regarding changes we wish to see.